Skip to content
All News
15 NOVEMBER 2021 ALL NEWS, PRESS RELEASES 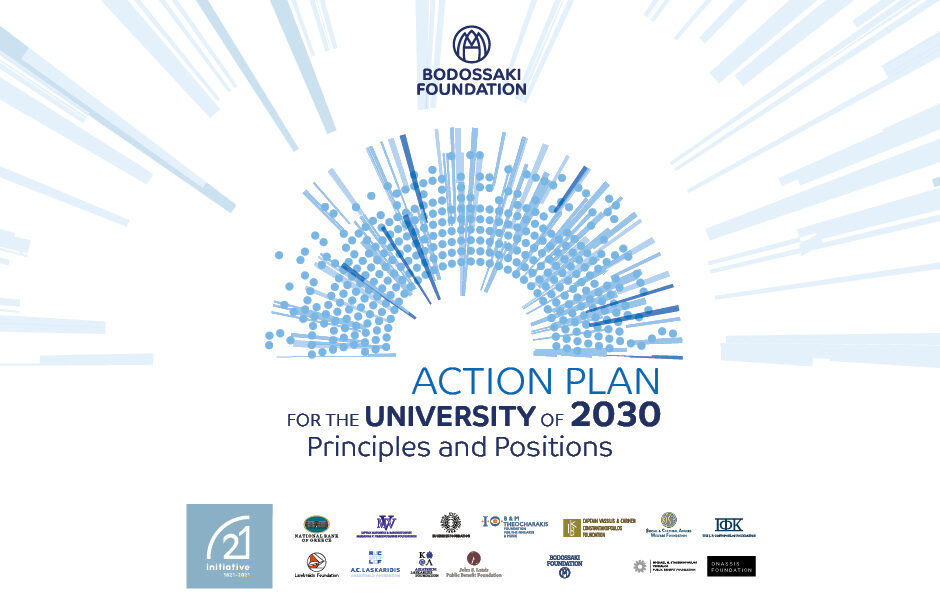 “Action Plan for the University of 2030: Principles and Positions”

To be followed by Action Plans for Public Health, tackling Environmental Challenges and Empowering Civil Society

In the context of its participation in the “Initiative 1821-2021” and looking to the future of Greece, Bodossaki Foundation undertook the preparation of four comprehensive Action Plans, for the University of 2030, the upgrading of Public Health, tackling key Environmental Challenges and the empowerment of Civil Society in our country, areas that fall under its pillars of action. The Action Plans are developed under the auspices of H.E. the President of the Hellenic Republic Katerina Sakellaropoulou. They were prepared by teams of scientists that were set up, offering pro bono, high-level scientific substantiating evidence.

The Action Plans aspire to lay the foundations for the exchange of views and ideas with the domestic and international scientific community, as well as with the social and professional actors involved. All Action Plans will be made available to the competent State authorities and other departments, for utilisation.

We are starting today with the Action Plan for the University of 2030, which was presented on 22 November 2021 at the Athens Concert Hall. For its creation, a Scientific Committee was established at the invitation of the Bodossaki Foundation. Coordinated by Ms Vasso Kinti, Professor of Philosophy of Science in the Department of History and Philosophy of Science of the National and Kapodistrian University of Athens, the Scientific Committee also consists of the following members:

The efforts to enrich and better document the plan also benefited from the input of distinguished Greek academics, who contributed their opinions, knowledge and experience.

After almost one year of work, the Scientific Committee for the University of 2030 has formulated a set of principles and positions for the future evolution of the Greek university, as the rapid progress of science and new technologies, and the interdisciplinary approach to complex problems, require a new organization of studies and research in our universities – one that will create free, democratic citizens and, at the same time, highly trained, innovative scientists. With academicity as the basic principle for rethinking higher education, the plan sets out in detail concrete, achievable proposals on effectiveness, autonomy and accountability, which seek to modernize Greek higher education in line with international standards. “Effectiveness – Autonomy – Accountability”, the three values at the core of the proposed Action Plan, were discussed during its presentation on November 22, by the members of the Scientific Committee and leading academics. Following the presentation of the Action Plan, the Scientific Committee will accept comments and questions, which should be sent by email to [email protected] until 22 December 2021, in order to be taken into account in the finalisation of the Action Plan and of the relevant texts.

“In the ‘Action Plan for the University of 2030’ we want to highlight those elements that can bring Greek public universities to the top tier of the world’s higher education institutions,” state the members of the Scientific Committee regarding the modern, productive and innovative University of 2030 that they envision.