Skip to content
All News
13 MAY 2021 ALL NEWS, PRESS RELEASES 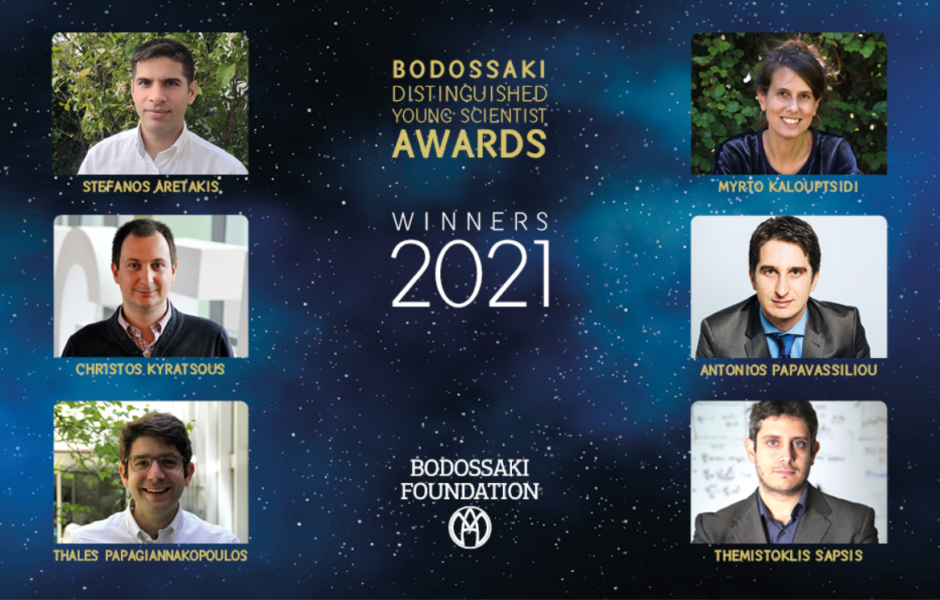 The six winners for 2021 have been distinguished for their outstanding contribution in the following academic fields: Science, Life Sciences, Applied Science and Social-Economic Sciences. The award ceremony of Bodossaki Distinguished Young Scientist Awards is expected to take place around the end of the year.

The award is presented jointly to:

The award is presented jointly to:

The award is presented to Myrto Kalouptsidi, Assistant Professor at Harvard University, in the Department of Economics, for her innovative research in applied microeconomics and her study at the intersection of Industrial Organization and International Trade.

The award is presented to Antonios Papavassiliou, Associate Professor at the Université Catholique de Louvain (UCLouvain), Holder of the ENGIE Chair and member of the Center for Operations Research and Econometrics (CORE) of the Louvain Institute of Data Analysis and Modeling at the UCLouvain, for his contribution to the rational use of energy resources and the large-scale penetration of renewable energy sources in electricity systems.

The institution of the Distinguished Young Scientist Awards is part of Bodossaki Foundation’s public benefit objectives for the promotion of education. With these awards, the Foundation acknowledges the creative work of young Greek scientists, rewards their consistent and continuous efforts to promote science, honours their moral consistency and seeks to contribute to the creation of proper role models for Greek society.

In the words of the President of Bodossaki Foundation’s Board of Trustees, Mr D. Vlastos:

“In a year in which the international scientific community shone with its outstanding performance in dealing with the pandemic, the awarding of Bodossaki Foundation’s Distinguished Young Scientist Awards brings to the fore the excellent work of young Greek scientists who excel internationally. Mr Stefanos Aretakis, Ms Myrto Kalouptsidi, and Messrs Christos Kyratsous, Antonios Papavassiliou, Thales Papagiannakopoulos and Themistoklis Sapsis, innovate, excel, are internationally recognised and contribute to the development of knowledge in key scientific disciplines.”

Bodossaki Distinguished Young Scientist Awards carry a cash prize and have so far acknowledged the work of 51 Greek scientists who are leading scientific research worldwide.