Skip to content
All News
15 JULY 2021 ALL NEWS, PRESS RELEASES 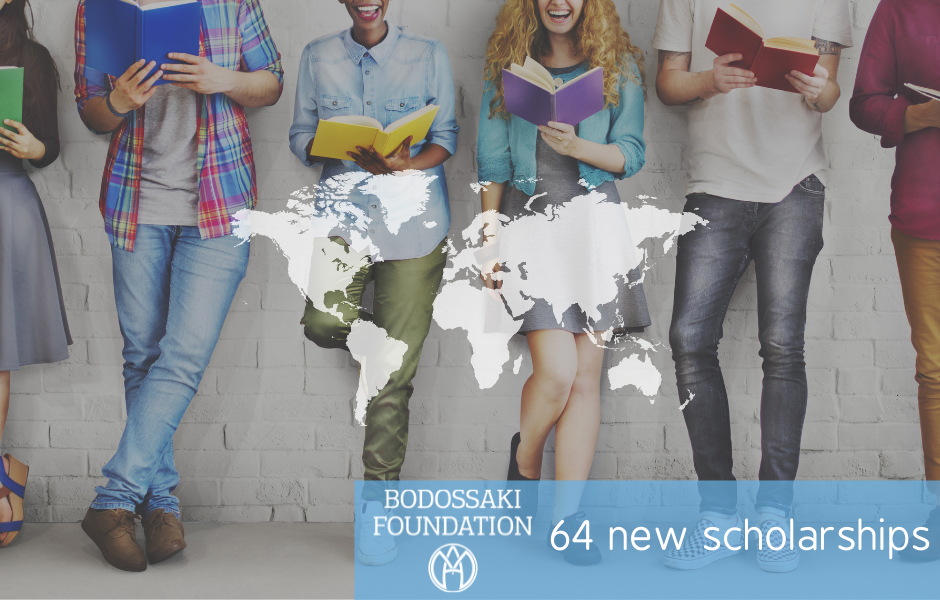 Bodossaki Foundation announces 64 new scholarships for the academic year 2021-2022, in alignment with its vision for a society of equal opportunities for all, which enables people to fully realise their potential. For the 49th consecutive year, the scholarships are awarded to young men and women who wish to enrich their education with postgraduate studies, PhD or post-doctoral research in top Greek and foreign universities, in the most popular and modern subjects, such as Biotechnology, Neurosciences, Machine Learning, Computer Science, Sustainable Development etc.

A point of reference in the scholarships sector as from 1972, Bodossaki Foundation recognizes and rewards the passion for scientific evolution, the anticipation for research innovation and the willingness to contribute to the society. Out of the 64 young people who have been selected for this year’s scholarships, 39 will follow postgraduate studies, 21 will pursue a PhD and 4 people will continue their studies with post-doctoral research. Furthermore, 22 scholars will study in Greek universities, while 42 scholars will study in Europe or in the U.S.

The quality of the applications has remained at a very high level. The applicants’ unique intelligence, as well as their ability for logical, original and analytical way of thinking was once again confirmed through the potential scholars’ interview process, as was their passion to contribute in the evolution of their respective scientific fields, their ethics and maturity.

According to the new President of the Bodossaki Foundation, Ms. Athina Dessypri, “We are very happy to notice that young people’s plans have continued to evolve, despite the unusual circumstances of this year. We have also continued to support their goals, determined to maintain the implementation of Bodossaki Foundation vision, which supports all of our actions and initiatives”.

Bodossaki Foundation welcomes 64 new members in the great Scholars Community of over 2,500 people, which are united under common values: