Skip to content
All News
23 AUGUST 2022 ALL NEWS, PRESS RELEASES 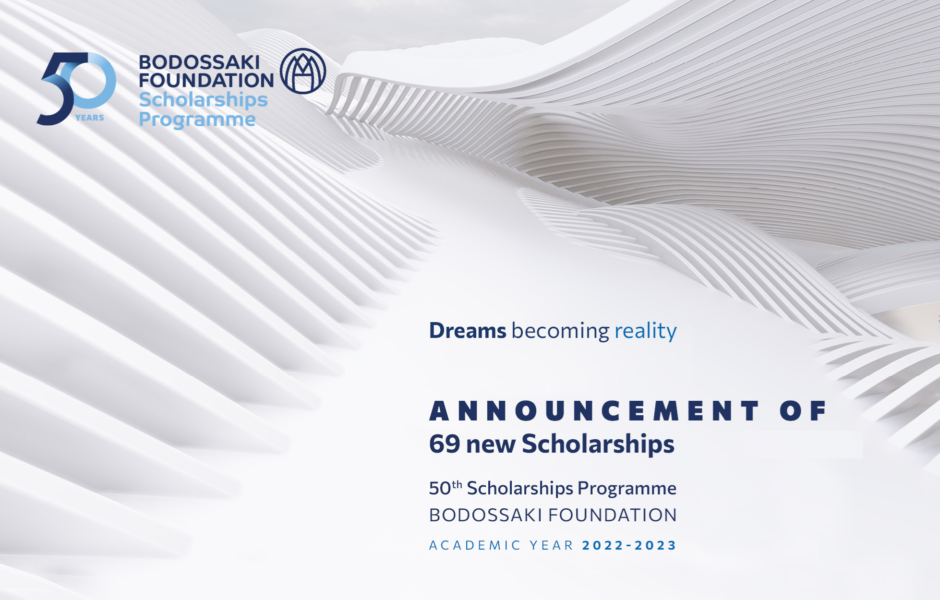 For the 50th consecutive year, young graduates – this year, 69 in total – see their dreams come true as they received a scholarship from Bodossaki Foundation for continuing their studies at postgraduate, doctoral or postdoctoral level in the academic year 2022-2023.

This year is particularly special for the Foundation, as it marks a twin anniversary: the completion of 50 years of the Foundation’s public benefit work and of 50 years of offering scholarships. The new scholars, who will be pursuing studies in modern and topical academic fields, now belong to the large community of over 2,500 Scholars who, although their career and evolution paths may differ, they all have in common the same starting point – a scholarship from Bodossaki Foundation – and share the same qualities of outstanding academic performance, creative drive and passion for their particular scientific field.

The above scholarships also include, for the very first time the “Scholars’ Scholarship”, an additional scholarship offered thanks to an initiative of the Foundations’ scholars. On the occasion of the 50th anniversary of the Scholarships Programme, scholars of the Foundation launched a crowdfunding campaign among previous Bodossaki scholars. The funds raised are used by the community of scholars to fund an additional scholarship, thus demonstrating in practice the common framework of values and the strong ties between the Bodossaki Foundation scholars.

Looking to the future, in 2022 Bodossaki Foundation’s Scholarship Programmes were brought up-to-date, seeking to promote interdisciplinarity and to include specialized scientific fields that respond to modern needs. In addition, the age limits for applying at both the Regular Scholarships Program and the Postdoctoral Research Scholarships Program, have been revised upwards.

What studies do the new scholars choose?

The scholarships of Bodossaki Foundation cover a wide range of scientific disciplines, covering basic sciences as well as modern basic sciences that employ cutting-edge technologies. This year, which was marked by the highest ever number of applications, Biology and the various specialized areas of Biomedical Technology and Informatics Life Sciences, Molecular Medicine and Bio-Innovation, and Targeted Drug Development, emerged as the candidates’ top choices and also ranked first in terms of the number of submitted applications and approved scholarships. Machine Learning and its Applications came next, while Nanosciences and Nanotechnology also attracted many candidates. At the same time, the highly topical fields of Data Science, Artificial Intelligence and Robotics, Digital Technologies, Network Technologies and Microelectronics, Production and Management of Energy Resources, and Materials Science, together with Environmental Sciences, were the object of sustained interest from the young graduates. Finally, Bioclimatic Design in Architecture, Business and Organization Management, Statistics and Operational Research remain areas attracting constant interest.