Skip to content
All News
5 APRIL 2022 ALL NEWS, PRESS RELEASES 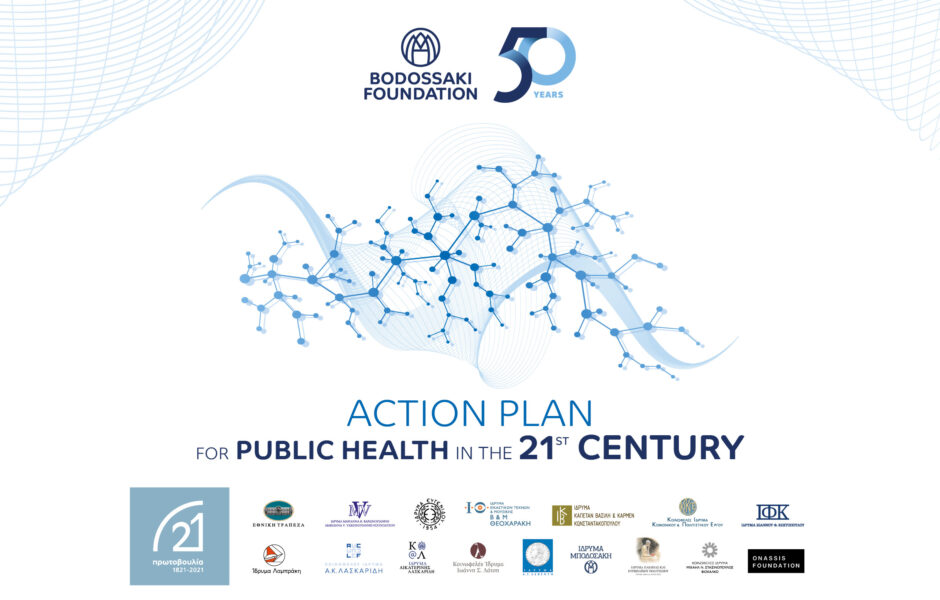 In the context of its participation in the “Initiative 1821-2021” and looking to the future of Greece, Bodossaki Foundation undertook the preparation of four comprehensive Action Plans, for the University of 2030, the upgrading of Public Health, tackling key Environmental Challenges and the empowerment of Civil Society in our country, areas that fall under its pillars of action. The Action Plans are developed under the auspices of H.E. The President of the Hellenic Katerina Sakellaropoulou and will be made available to the competent State authorities and other departments, for utilisation.

Wishing to contribute to the debate on the future of Public Health in Greece, the Foundation invited distinguished Greek public health experts to contribute the best available scientific documentation and international experience in this effort. For the development of the Action Plan for the Public Health, a Central Coordination Team was established, which in collaboration with a 50-member Scientific Team and after 18 months of pro bono work and dialogue with the academic and professional communities and the other actors involved, taking also account of international developments, formulated an Action Plan for the upgrading of the Greek Public Health system.

The Action Plan will be presented as a discussion document on 12 April 2022 at the Athens Concert Hall.

The Central Coordination Team consists of eight members and is chaired by:

The Action Plan for Public Health in the 21st century presents the building blocks of a modern Public Health System, together with the conditions for its implementation, placing great emphasis on the citizens’ right to health, equality and sustainability. Rather than the system for the provision of healthcare services, the Plan concerns the cross-sectoral policies, services and activities related to preventing diseases and promoting health, protecting and monitoring the health of the population, and managing health crises such as the COVID-19 pandemic.

The Action Plan puts forward prioritised proposals that could serve as the basis for a strategic roadmap for 2030, whose key preconditions are extensive dialogue, broad consensus, political will and the engagement of the actors involved from early on in the process.

The methodology followed for the Plan’s development drew on the most up-to-date concepts of Public Health at the international level and on the United Nations’ Sustainable Development Goals, covering all key Public Health functions in accordance with the WHO reference standards. Moreover, a survey was also carried out for the first time in Greece on the attitudes and perceptions of Public Health workers regarding the system’s operation and reorganisation.

In the presentation event of 12 April, the Action Plan will be presented by Mr. Agis Tsouros and will be discussed in more detail in the following interdisciplinary panels, moderated by journalist Christina Vidou:

From the four Action Plans that Bodossaki Foundation has undertaken to prepare and present, one more Plan –in addition to the Action Plan for Public Health in the 21st century–, namely the Action Plan for the University of 2030, was presented at a special event held in November 2021. The remaining two Action Plans to follow will focus on addressing key Environmental Challenges and strengthening the Civil Society.