Skip to content
All News
6 AUGUST 2021 ALL NEWS, PRESS RELEASES 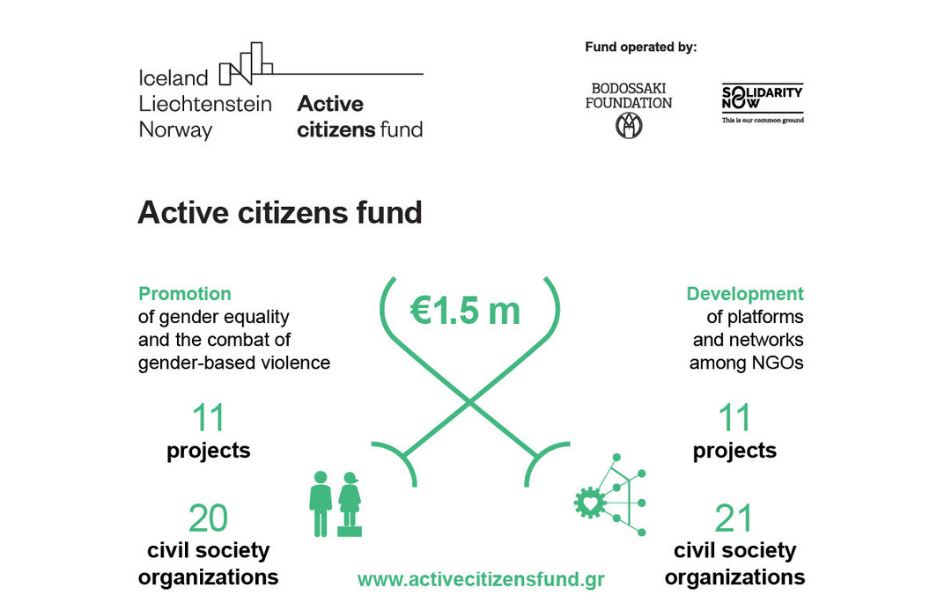 Bodossaki Foundation and SolidarityNow, in their capacity as Fund Operator of the Active citizens fund programme in Greece, announce the Civil Society organisations selected to receive a total of €1.5 million in grants for projects that will promote gender equality, will combat gender-based violence and will develop cooperation networks between Civil Society organisations.

With a budget of €12 million, the Active citizens fund programme is funded by Iceland, Liechtenstein and Norway and forms part of the European Economic Area Financial Mechanism (EEA Grants) for the 2014-2021 programming period. The programme seeks to develop the long-term sustainability and capacity of Civil Society, with the aim of strengthening its role in promoting democratic participation, active citizenship and the protection of human rights.

The present grant of €1.5 million is made available for supporting the implementation of a total of 22 projects, selected from among the 163 applications submitted in response to the programme’s calls for proposals in the following areas: “Promoting gender equality and combating gender-based violence” and “Development of networks between Civil Society organisations”.

The subsidised projects are expected to benefit – among others – women who are victims of gender-based violence, women who have been subject to sexual harassment at work, adolescent women who are victims of gender-based online violence, schoolchildren, educators, students, prisoners held in prisons, refugees and immigrants, the chronically ill, minority groups, the homeless, the long-term unemployed, LGBTQI people, people with disabilities and psychosocial difficulties, etc. However, the projects also concern the implementing organisations themselves, as – for the first time in Greece – funding is also provided for the creation, support and sustainability of cooperation networks between Civil Society organisations, so that they can jointly tackle topical social problems.

The selected projects will take place all over Greece, from major urban centres (Athens, Thessaloniki, Patras etc.) in rural, island and remote areas of the country, such as, for example, the Aegean islands (Tinos, Kea, Mykonos, Kythnos, Sifnos, Serifos, Paros, Antiparos, Milos, Andros), East Macedonia and Thrace (Drama, Kavala, Komotini, Alexandoupolis etc.), the wider region of Crete, as well as Western Greece and the Ionian Sea (Thermo, Agrinio, Corfu etc.). The programme’s goal is to develop the capacity of Civil Society organisations at every location in the country. Some of the projects are country-wide, while others focus on strengthening local communities. Part of the funding will be allocated to capacity building activities for the very organisations that will implement the projects, thus contributing to the sustainability of the programme’s results.

The projects are selected in a way that ensures transparency and merit-based assessment at all stages of the process. Projects are rated by independent scorers with experience in the field, while the selection committee also includes members external to the Fund Operator’s organisation. The Norwegian Embassy and the EEA National Contact Point in Greece participate as observers.

“For Bodossaki Foundation, strengthening the capacity of the Civil Society is a strategic priority. Through the third cycle of Active citizens fund grants, which are managing jointly with SolidarityNow, we are funding a total of 22 projects with 1.5 million euros. These projects, which will be implemented across the Greek territory by 41 Civil Society organisations, will contribute to the promotion of gender equality and the fight against gender-based violence, at a critical juncture for our country, while at the same time they will also contribute to the development of cooperation networks between the Civil Society organisations. With their multidimensional and targeted actions, the 22 projects will contribute to – among other things – the efforts to support and protect women, girls, children who are victims of domestic and online violence, and to the fight against gender inequalities in Greek education. At the same time, and for the first time in Greece, funding is being provided for creating and strengthening cooperation networks between Civil Society organisations, so that they can pool resources and adopt a collaborative approach in order to address social problems such as the Sustainable Development Goals, the institutional recognition of the equal role of patients in all the processes involved in formulating, implementing, monitoring and evaluating health policies, and the role of Civil Society organisations in Open Governance.”

“At SolidarityNow, as participants in the management and implementation of the Active citizens fund jointly with Bodossaki Foundation, we are very pleased that we can meet an urgent need of our times: To support projects on gender equality and combating gender-based violence. An issue that is high on the global agenda, which concerns us all and to which our response requires us to join forces. This is precisely what we are aiming for, by funding 22 new projects during the coming months. Targeted action by Civil Society organisations, active throughout the country, in order to raise awareness, educate, empower and, ultimately, create the conditions that will help break the silence that usually accompanies all kinds of abuse. We work together and share the same vision for an inclusive, open and cohesive society. In order to get closer to this vision of an open society, we need more equality, stricter respect for human rights, and open access to opportunities. In other words, we need more solidarity. Now and tomorrow, as we also did yesterday.”